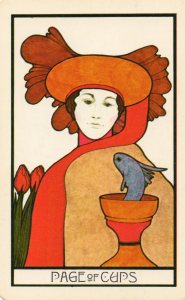 The Page of Cups from the Aquarian Tarot

The first time I got a Tarot reading, I was in college. I can’t remember how it came about exactly, but we were totally sober and maybe a little bored when my friend offered to read for me. Getting a Tarot reading sure beat the alternative of doing homework on a Sunday afternoon, so I eagerly accepted.

My friend pulled out his deck from a scarf wrapping, and I was surprised that the Tarot deck was so much larger and thicker than regular playing cards. I marveled at the beauty of the deck he used, the Aquarian Tarot. I was even more amazed that it was a gift from his mother. His mother was a hippy, he told me, and he learned how to read the cards from her. I was jealous – my mom was more about coupon-clipping and mentoring frugality than encouraging esoterica and self-actualization. 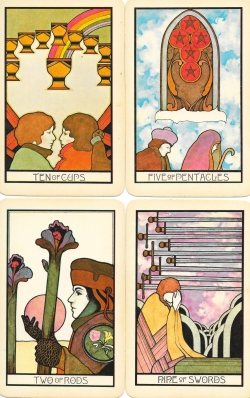 As my friend went through the cards and characters, I hoped to hear exactly when I was going to get my “big break” and how much money I was going to make and when someone was going to fall in love with me. Instead, the reading covered some mundane matters – school stuff, really. It encouraged more focus and fire on my part. Which was not super romantic but so, so real. And because it was honest, I was hooked.

A few months later, my friend gave me my own Aquarian Tarot deck for my birthday. My first Tarot deck. I handled the cards regularly, fawning over the lovely images. The artwork alone inspired ideas and possible interpretations that hinted at more than the “Little White Book” suggested, so I also got a bigger book. And another. I tried to memorize other folks’ definitions, I practiced on anyone who would sit still long enough for a reading.

I got more decks, more books. I started a Tarot journal. And I kept practicing. 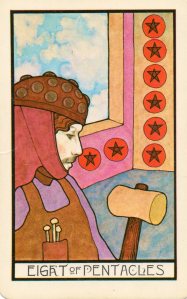 The Eight of Pentacles from the Aquarian Tarot

There were books that helped to build a structure for understanding the Tarot (like Choice Centered Tarot by Gail Fairfield), and other decks that helped set specific cards as elements of a story that fit together (like the original Mythic Tarot or the Lover’s Path Tarot). But the significance of my first Tarot deck to my Tarot journey was really underscored by a first time client.

I was doing Tarot readings at a Goddess party a few months back, and I gave the readee a choice of decks to choose from. Since my Tarot collection is now over 30+ decks, I usually bring 3 or 4 decks to parties – one deck whose imagery goes with the theme of the party, then one sweet/romantic/relationship-y one, then maybe a bold deck that gives strong advice, and always my old standby, the Aquarian Tarot.

The new client looked at my collection of decks and picked up the old Aquarian Tarot, now yellowed and quite worn, and she said, “This one looks…cherished.”

I said, “Oh yes, that’s my very first deck! This is the one that began it all. I’ve been reading with this one for almost 30 years!”

“Then that’s the one I want my reading with,” she replied. 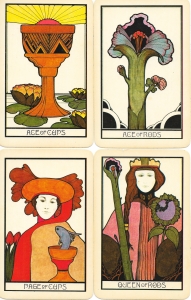 Ace of Cups and Wands, Page of Cups, Queen of Wands from the Aquarian Tarot 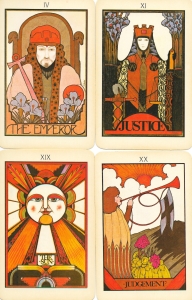 The Emperor, Justice, The Sun, and Judgment from the Aquarian Tarot

Creators Monte Farber and Amy Zerner have a lot of fantastic self-counseling & divinatory tools, but naturally, I use their tarot deck the most. Years ago, I invested in The Instant Tarot Reader: Book And Card Set

which is a terrific resource for beginning Tarot readers. The book provides an excellent introduction to basic tarot skills while offering a number of interpretations for each individual card depending on the issue at hand. Learning how to apply the essence of each card to answer different kinds of questions is often real a challenge for new readers, and this book illustrates how the energy of each card can expand/contract/shift to fit different situations. 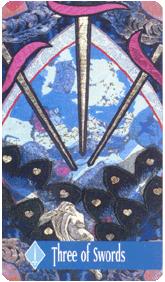 The Three of Swords from the Zerner Farber Tarot

The artwork in the deck itself is lovely, sweet and totally approachable. The collage imagery provides a more positive “feel” about them in comparison to more traditional decks, and every time I use them clients remark on how pretty they are. (In contrast, some other decks express images in ways that can turn-off or scare folks who might otherwise be curious about the Tarot.) The deck that comes with The Instant Tarot Reader is also smaller than many traditional decks, which make it easier to shuffle, spread, and carry. 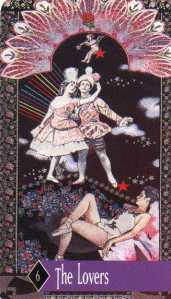 The Lovers from the Zerner Farber Tarot

which is available by itself (without the book).   Or, for the deluxe experience (including deck, book, a pouch and a dvd with further interpretive insights and guided meditations), there’s The Tarot Discovery Kit: A Dynamic Journey to Your Self and Beyond 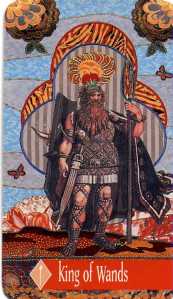 The King of Wands from the Zerner Farber Tarot

I use this deck regularly – especially for new clients and for love readings – because it really has a soft, supportive vibe to it.  This deck would be an excellent addition to any Tarot reader’s collection.
Happy gifting!

My mission is to inspire and aide the evolutionary process, uncovering the truthful joy within limitless self.

All articles and poetry are the intellectual property of Jennifer Kenyon at Bohemian Path Tarot.